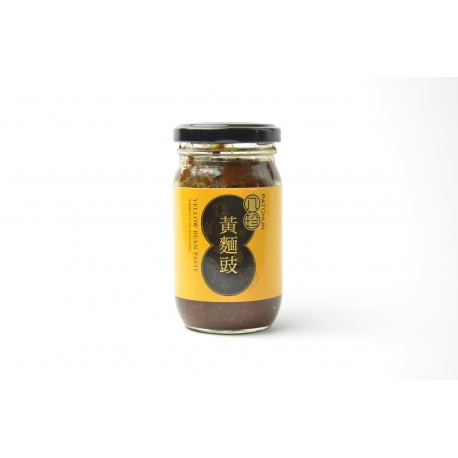 This versatile natural bean paste is excellent in……

Description:
Yellow Soy Bean Paste is made from simple ingredients but require great skill during its lengthy production. After half a year of multiple stage fermentation, the top layer that has been naturally darkened under the sun is known as soy bean paste supreme, while the lighter coloured beans in the interior of the tank is referred to as yellow soy bean paste.

Usage: Yellow soy bean paste (compared to soybean paste supreme) has a lower salt content and retains more of the fresh bean flavors – it excels when used to build up base flavors, such as in marinades for spareribs, as a compliment to vegetables or oily fishes (salmon, cods etc…) and or as a soup base or sauce for noodles.

Notes: The majority of the soybean paste found on the market are merely the solid substrate leftover from soy sauce fermentation; much of the flavor has already been absorbed by the soy sauce, rendering the paste tasteless unless artificial flavors are added. Patchun insists on using fresh beans and wheat that are dedicated to bean paste production to maximize flavors without additives.

Be the first to write your review!

10 other products in the same category: